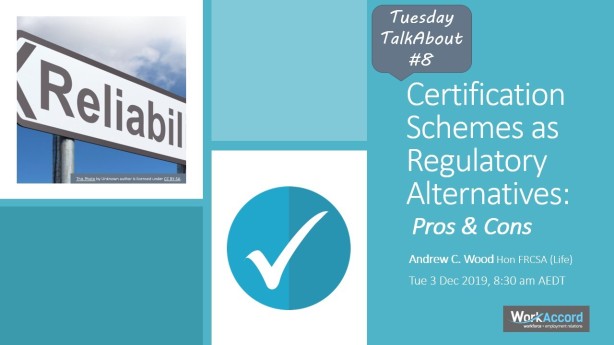 In WorkAccord’s next free Tuesday TalkAbout I’ll discuss different types of certification schemes and consider their pros and cons as regulatory alternatives. In doing so, I’ll also look at Regulatory Impact Statement that supported the Victorian licensing scheme to see how it worked. What assumptions were made? Were they correct? How might a federal RIS and outcome differ?

I hope you’ll join me.

Stocking up on coffee and snacks, and fine-tuning my playlists…

Also preparing a Tuesday TalkAbout on the topic: “Certification Schemes as Regulatory Alternatives: Pros & Cons” and a webinar Bootcamp for next Friday on the topic: “Whistleblower Policies (Strengthen Your Knowledge)”.

Enjoying the shift in focus as governance advocacy takes shape… 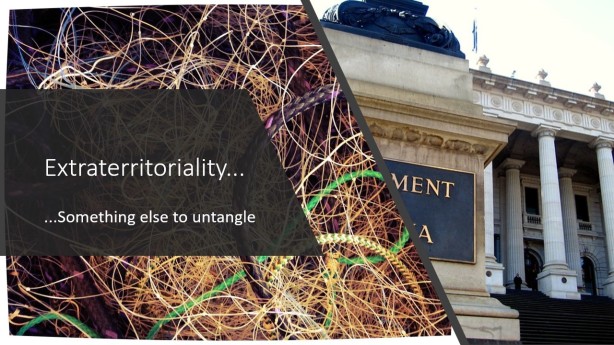 All three acts contain provisions that attempt to extend their application beyond state boundaries.[2] The exact wording in each case is different but basically, they attempt to extend the laws to the maximum extent of the legislative power of their respective Parliaments. No one knows for sure exactly what that is because it hasn’t been tested in this context. But it seems generally correct to say that, provided there is some real connection (or nexus), with the home state, the laws are capable of applying in some other state (or country). END_OF_DOCUMENT_TOKEN_TO_BE_REPLACED

“Exploitation” and “Wage theft” are emotive and pejorative terms that are used freely by commentators and policymakers calling for harsh penalties. But can any “breach of minimum employment standards”[1] count as exploitation?

Is an employer guilty of exploitation or wage theft for “not complying with the minimum legal entitlements of their employees”?[2] or is something more required to earn the badge of iniquity? Something that colours the non-compliance as misconduct or unconscionable?

What do you think? 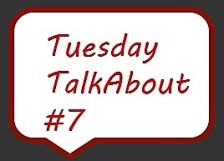 You’re cordially invited to come along and have your say in WorkAccord’s next Tuesday TalkAbout, on November 26, when we’ll be talking about “Modern Slavery, Exploitation and Vulnerable Worker Protections”.

I hope you’ll join me!

[2] The understanding conveyed by the Australian government Migrant Worker Taskforce in its report, March 2019.

This is my first attempt at video. Please treat it kindly. I clearly need a director, hair and make-up!

Nevertheless, I do hope you’ll join me for our next Tuesday TalkAbout on 19th November at 8:30 am AEDT, when we’ll discuss LAbour Supply Chains.

Here’s a link to register for the webinar. it’s free and it’s live. 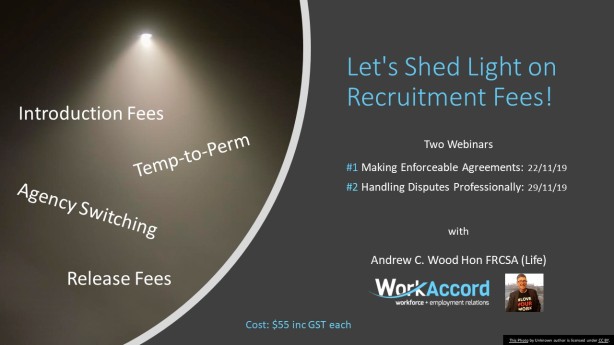 I hope you’ll join me when we shed light on the topic of Recruitment Fees in two separate webinars planned for Thursday 22nd November and Thursday 29th November at 10:30 am AEDT.

In our first webinar, you’ll learn how to make binding and enforceable recruitment fee agreements.

In our second webinar, you’ll learn how to manage fee recruitment disputes ethically and professionally.

You can find out more about the webinars in my Recruiters’ Casebook blog here. 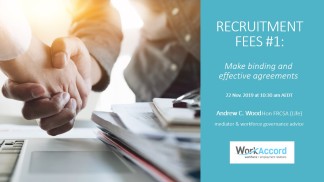 In the first session, we will discuss how to make binding and effective recruitment fee agreements that will reduce the cost of disputes and help get your fees paid. 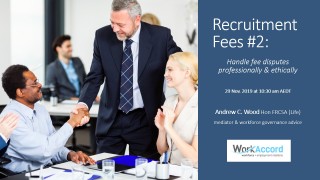 In the second session, you will learn how to handle recruitment fee disputes professionally and ethically to preserve goodwill, reputation, and to improve payment outcomes.

I hope you’ll join me. And if you have questions about the topic, please feel free to send them to me ahead of the event.

This Article May Contain Sensitive Material

For any youthful readers of this piece, let me start by saying that we all know that the real Father Christmas lives at the North Pole with Mother Christmas, the Pixies, Rudolph and the other reindeer.

And we all know that all the friendly people who run around in costume – the Santas, Mothers Christmas (I hope that’s the correct plural), the Pixies, the Wise Persons, Shepherds, Angels, and pantomime camels – let’s call them the Christmas Talent – are just helping out. It could be a franchise, I’m not sure. I haven’t looked at it.

At least, I hope we all know that Christmas Talent is mostly pretend. Nevertheless, it’s always fun to see them because we know that when they start popping up in the stores, Christmas is not too far away.

Up until now, a lot of the Christmas Talent have been sourced through talent agencies. Up until now, that’s not been a problem in Victoria – but now it might be.

It might be a problem because if you’re supplying workers (let’s say Christmas Talent) to another person (let’s say a department store) to perform work in and as part of the store’s business or undertaking (seems likely), then you might need a labour hire licence.

This test is sometimes called an “integration test”. It’s not easy to apply, and it can depend on subtle, fact-sensitive inquiries that can only be determined authoritatively by a court. It can also have some pretty unexpected results.

Queensland and South Australia got this right because in those States talent agencies are subject to private employment agency regulation in addition to labour hire licensing.

So, Queensland and South Australia both created an exemption from the need to have a labour hire licence if you are acting solely as a private employment agency.[1]

But there’s no similar exemption in Victoria. So, if you’re supplying a worker to do work in and as part of another person’s business or undertaking, you’ll possibly need a licence (unless you can bring yourself within one of the other exceptions).

Also in Victoria, if you’re sourcing and placing workers (let’s say Christmas Talent) with clients who are engaging them directly as independent contractors, and you continue to handle payroll or other aspects of the placement administration, you’ll possibly need a licence (unless you can bring yourself within one of the other exceptions).

It gets even more complicated if your Christmas Talent is self-incorporated – i.e. they’re working through their own small company. That’s because their own small company is supplying the individuals who perform the work and therefore needs to hold a licence in its own right (unless it can bring itself within one of the exceptions).

Fortunately, there is an exception for small companies that have no more than two directors and only supply their directors who participate in management or share in the profits.

But that exception will only go so far. An exempt company couldn’t supply say, Three Wise Men – apart from whatever difficulties they might have in sourcing three wise men (old joke). Two would be OK provided they were both directors who participated in management or shared in the profits.

Likewise, a pantomime camel needs two people (front end and back end). That would be OK provided both ends were directors who participated in management or shared in the profits. But if one end gets sick – they’re going to end up with a two-legged camel unless they’ve got a labour hire licence. That’s because substitution requires a third person.

Same deal with Rudolph. And if you’re thinking of hiring the Von Trapp Family Carol Singers – better check their labour hire licence unless they’re incorporated and you’re only wanting two of them!

Although there’s an exemption for incorporated workers, it doesn’t extend to family partnerships or other unincorporated business structures.[2]

Call Me a Grinch!

I could go on… But you’ll have the gist of it by now, and you can perhaps see the problem that arises when labour-hire licensing is introduced on a universal coverage basis without being targeted to the sectors where it’s really needed.

Did anyone think this would be an outcome when the scheme was proposed? Of course, they didn’t. The States were urged to adopt targeted schemes. The Victorian Forsyth Inquiry even recommended it.  But those urgings and recommendations were mostly ignored.

So if you’re hiring Christmas Talent in Victoria this year or if you’re working as Incorporated Christmas Talent, whatever other checks you do, be sure to check that any necessary labour hire licence issues are covered.

[1] It can get tricky if you’re doing more than acting purely as a private employment agency – say handling payroll or administration.

[2] South Australia fixed this up by Gazettal on 26 September 2019. Although the exemption is still limited to a maximum of two workers. 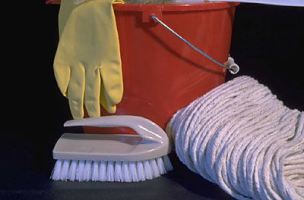 Victoria’s labour hire licensing scheme is fully up and running – though perhaps stumbling forwards might be a better description.

After 6 months only about 380 licences have been granted, with another 50 or so granted subject to payment of fees.

There are more than 3,700 unprocessed applications. They are still coming in despite missing the cut-off date. If you’re in that long queue – or having to join it because you’ve decided you’d like to extend your labour hire business to Victoria – it could be as much as 12 months before you hear the outcome of your application.

One of the things that did surprise me was the fact that 200 or so applicants missed the cut-off last week by only a matter of days – even hours in some cases.

Cleaning firms seemed to be strongly represented amongst the near-misses, perhaps because of uncertainty about how the complex integration test and deemed worker provisions applied. Though there were others as well, including general labour hire providers, interstate providers, and at least one legal recruiter.

Those near-misses are going to hurt because, unless the applicants can fix something up quickly with the Authority, a miss is as good as a mile.

So, what’s likely to be happening now?

I suspect that there may be more than a few who have obtained their licences, or got their applications in ahead of the cut-off, who’ll be looking closely at the near-misses and perhaps giving their competitors, or their clients, a cordial “heads up”.

The regulator may be looking as well. If you’ve provided details of your clients and their workplaces, the regulator will know where to find them and might consider giving your clients a cordial reminder that the prohibitions are now in effect.

Clients are likely to be looking at the registers to see which side of the cut-off their suppliers fall on. You might find that they are terminating contracts with unlicensed providers and thinking about what action they can take to recover the cost of entering into new or alternative supply arrangements.

There’ll be workers (and their unions) who’ll be wondering whether they still have jobs, and more than a few clients might be wondering how they can transition supplier arrangements.

There’ll also be more than a few who’ll have to fix up their websites and marketing so that they’re no longer advertising a willingness to provide labour hire services.

Maybe it will settle down eventually, but until then it’s a bit of a mess.  Who knows, perhaps a federal scheme that prevails over state laws with a concerted move to dismantle the systems in the three states that now have labour hire licensing will be all that can clean it up.